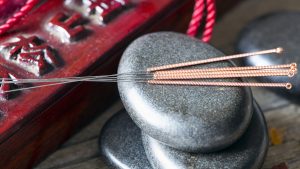 Acupuncture is the gentle insertion of very fine, virtually painless needles at specific points on the body to restore proper functioning of the nervous, lymphatic, respiratory, digestive, musculoskeletal and endocrine systems.

Acupuncture helps to treat and prevent illness by improving the overall functioning of the body’s immune and organ systems. Acupuncture is helpful for:

Chinese medicine is the most inspiring and life-affirming of the branches of world medicine because it recognizes that we are comprised of a physical body, a thinking mind and active emotions, all of which need to work together for health.

The exquisite ability of acupuncture and the other tools of Chinese Medicine to correct acute and chronic emotional and physiological problems without drugs or surgery is one of the marvels of the human experience.

Patient satisfaction with Chinese medicine is significantly higher than it is for western medicine. A landmark study by Claire M. Cassidy, Ph.D., in the Journal of Alternative and Complementary MedicineVol.4 , Number One, 1998 entitled “Chinese Medicine Users in United States: Utilization, Satisfaction and Medical Plurality” indicates that patients are extremely satisfied with the processes and the results of Chinese medicine.

A significant plurality of the subjects in this study, when asked to whom of their many medical providers they gave the most credit for their improvement, stated that their acupuncturist “was the one who made the difference.” Fifty-seven percent said that their improvement was “definitely” due to acupuncture, 19.9% said it was “probably” due to acupuncture, and only 17.5% said was “due to a combination of factors.”

How does acupuncture work?

Although acupuncture is normally described in metaphorical and poetic terms, it is, like western biomedicine, “real” medicine. Acupuncture works through sound, scientifically explainable physiological processes. The insertion of a needle into the skin and underlying muscles causes minute local tissue trauma which activates tissue damage and repair mechanisms and begins a long chain of events within the body which result in the normalization of function and structure.

Acupuncture stimulates chemicals, hormones and neurotransmitters which are released by the brain and the organs to influence the self-regulating systems of the body. The ancient Chinese theorists and practitioners made the remarkable discovery that a tiny needle placed on the outside of the body can have extraordinary effects on the inside of the body.

The complex physiology of the mechanisms of action of acupuncture validates the fact that acupuncture is a valued component of world medicine based in the real world and not in the metaphysical world.

There are six phases of needling-induced tissue reaction. The first four phases predominate in the initial stages of the reaction and the last two predominate during the intermediate and later stages of the reaction. Tissue reaction takes place primarily through several steps in the blood coagulation system and tissue repair system. The immune response which is critical to acupuncture’s ability to strengthen the body’s defenses uses a process called the immune complement alternative pathway. The complement system is a biochemical cascade which helps clear pathogens from the body . It is part of the larger immune system and does not change over the course of an individual’s lifetime; as such it belongs to the innate immune system. The genius of the ancient Chinese physicians was in manipulating this inborn defensive system into a major component of a complete healing system.

The strength of needle stimulation and retention time are important considerations in the treatment of specific problems. Strong needle stimulation with short duration of retention favors the initial phases of the needling response. This would be considered, for example, in cases of pathogenic attack such as the flu, to enhance the inflammatory component of the immune response. Milder stimulation with longer duration of retention favors the later phases of the needling response and would be used in such cases as muscle strain or backache to produce a strong anti-inflammatory reaction to reduce pain and swelling and increase mobility.

What has come to be seen as “Traditional Chinese medicine theory” explains acupuncture in terms of that energy or “qi” which flows in channels (or meridians) throughout the body and over its surfaces. These channels are seen as ‘rivers of energy’ flowing through the body. The channels are often compared to a series of interconnected highways. Each major organ is associated with its own meridian. Through the network of channels the internal organs are connected to certain areas and parts of the body including the muscles, bones, joints, and other organs.

Chinese doctors are said to believe that health is a manifestation of balance, both within the body itself and between the body and the external environment. When the body is internally balanced and in harmony with the external environment, Qi flows smoothly through the channels to nourish the organs and tissues. If an obstruction occurs in one of the channels, the Qi is disrupted and cannot flow properly. When the Qi cannot flow smoothly or is forced to flow in the opposite direction, the body’s innate balance is disrupted and weakness or illness results.

The preceding description is valid and there is no harm in viewing acupuncture in this poetic and metaphysically oriented way, provided that one is aware that the processes and the effects of acupuncture, more accurately translated from the original Chinese as needling therapy, are fundamentally rooted in the real world of anatomy and physiology. Science and art intertwine and support each other, as in the metaphor of the black and white Tai Chi symbol.